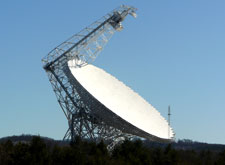 As of Summer 2021 this web page is no longer being updated. For information about MUSTANG-2 proposals, observations and data analysis please refer to: this web page

MUSTANG-2 is a 223-feedhorn bolometer camera which was commissioned on the GBT in spring 2016, and is being offered for observations on a shared risk basis, in collaboration with the instrument team, in the 2018A GBO proposal call. Several features distinguish it from its predecessor, MUSTANG:

MUSTANG-2 has been developed by a collaboration including the University of Pennsylvania, NIST, NRAO, the University of Michigan, and Cardiff University. All critical MUSTANG-2 systems have already been proven in operation on the GBT in early 2015 during an engineering run using a partially populated version of the receiver ("MUSTANG-1.5", which had 64 populated feed horns).

Some basic performance information is as follows:

In order to cope with an evolving funding landscape the GBT is in the process of moving to a model which relies upon a larger fraction of private and collaborative ("pay-to-play") partnerships. It is expected that a significant fraction of GBT time, depending on the future level of NSF funding, will remain open under something like the current proposable, open-skies arrangement; however the mix of observing capabilities that is available under this arrangement is TBD. If you are interested in forming or contributing to such a partnership to ensure continued access to MUSTANG-2 on the GBT, please contact the director of the Green Bank Observatory, Karen O'Neil.

MUSTANG & MUSTANG-2 Publications We request that publications resulting from MUSTANG observations on the GBT include the following acknowledgement: "The authors would like to thank the MUSTANG instrument team from the University of Pennsylvania, NRAO, Cardiff University, NASA-GSFC, and NIST for their efforts on the instrument and software that have made this work possible. ". Additionally, we request that you cite Dicker et al. (2008) in the paper text. NRAO offers page charge support if you do a few simple things.

MUSTANG-2 has been installed on the GBT with upgraded readout multiplexers and 211 detectors working. Observing on shared risk science proposals in collaboration with the instrument team have begun.

The full MUSTANG-2 camera achieved first light on the GBT in May, 2016! It will return to the GBT in fall 2016 for shared-risk science through the 2017-A Green Bank Observatory proposal call.

The NSF ATI program has funded our proposal to fully populated the MUSTANG-2 focal plane with 215 dual polarization detectors. The completed MUSTANG-2 receiver is expected to arrive at the GBT for commissioning & early science observations early in 2016.

MUSTANG-1.5 completes successful engineering run on the GBT (May, 2015)

MUSTANG-1.5 was successfully integrated with the GBT and first light observations of a variety of sources obtained. This run allowed the team to shake out final integration issues with the telescope and software systems, and constituted the first astronomical use of MKID-style microwave resonators to read out TES detectors.

MUSTANG-1.5 arrived in Green Bank and is preparing for first light on the GBT later this month!

MUSTANG-2 is Under Construction!

MUSTANG-1.5 is currently being integrated and tested in the lab at U.Penn., with first light on the GBT scheduled for winter 2014.

In June 2014 72 packaged detectors were delivered to U.Penn for testing and characterization.

Left: Cutaway view of tapered feed design; Right: the final MUSTANG-2 feed horn array as fabricated (223 feeds). The feed array weighs 8kg and has been successfully cooled to 300 mK in the MUSTANG-2 cryostat.

Cutaway showing the design of the MUSTANG-1.5 receiver

Pictures of the receiver in the lab at U.Penn.

One ROACH board with its custom daughter cards for the microwave resonator readout.

MUSTANG retired at the end of 2013

MUSTANG-- the original 90 GHz, 64 pixel GBT bolometer camera-- was retired at the end of calendar year 2013 in anticipation of the arrival of its successor, MUSTANG-1.5 MUSTANG proposals were accepted from June 2009 through Feburary 2012.

A concerted campaign of phase coherent holography measurements and actuator repairs has resulted in further, remarkable improvements in the GBT surface: the current Ruze-equivalent surface RMS is estimated to be better than 275 microns rms! This means that MUSTANG should be at least 50% more sensitive than it was for Spring 2009 observing. The following image shows a sequence of surface maps made over the course of the year. The campaign of traditional, phase-coherent holography led by Todd Hunter & Fred Schwab is paying off, having already yielded a factor of two improvement in the GBT 90 GHz aperture efficiency with more improvements on the way. More information can be found in the February and May NRAO e-news.

Map of GBT surface irregularities before (left) and after (right) corrections based on a series of holographic surface maps. The version numbers refer to which set of surface corrections were in place at the time the map was made, with higher numbers (e.g., v3.05) indicating more recent, better maps. (Image courtesy of Todd Hunter & Fred Schwab, NRAO)

Scans across the moon at 46 GHz with the GBT with three different sets of surface corrections in place on the telescope, showing the far sidelobe response. The more recent telescope surfaces yield substantially lower sidelobe levels, as expected. (Image courtesy of Todd Hunter & Fred Schwab, NRAO)

Scan through a calibrator source with MUSTANG showing the initial, 10% efficient surface response (v1.3), and the improvement that results from an early set of holographic surface corrections (v2.35). On this scale the July 24 2009 map (v3.05) is expected to give a peak intensity of 2. (Analysis by Phil Korngut, U.Penn)

Using "out-of-focus" or phase-retrieval holography techniques, it is possible to make real time measurements of the medium to large scale aberrations in the GBT surface by analyzing in-focus and out-of-focus beam maps of bright calibrator sources. Acquiring the data, analyzing it, and applying the resulting corrections to the telescope surface requires less than 15 minutes with MUSTANG, and the process is essentially completely automated (requiring the user only to push a button to accept & send the solution).

In focus (center) and two out of focus (left, right) maps of a bright point source.

Left: GBT phase error map derived from the beam map data above. Color scale is in radians; note that since MUSTANG only illuminates the central r=45m, the phase at the outer edge of the dish is unconstrained and not important observationally. Right: The beam that results from applying the aperture phase corrections to the telescope (on a slightly burned in scale, common to all four beam map plots). Near-in sidelobe levels are lower and the peak foward gain is typically increased by 20-30%.

MUSTANG+GBT 90 GHz map of Orion on 3 color scales emphasizing the dynamic range and sensitivity to extended structure that has been achieved. These maps resulted from early science observations in Spring 2008; the area covered is approximately 5'x10'. 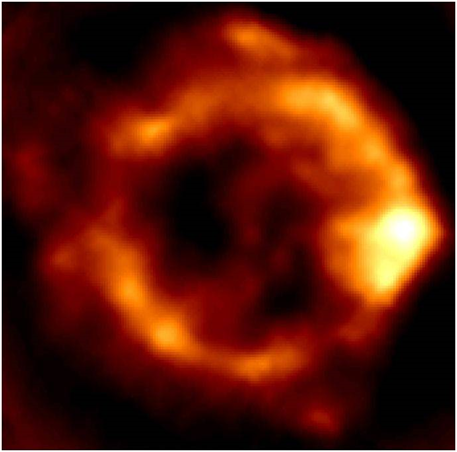 MUSTANG+GBT map of Cas A collected during commissioning, January 2009.

MUSTANG+GBT large-area map of the W3 region (0.4 deg x 0.3 deg). This map required 45 minutes to collect and was a test of MUSTANG's large-area mapping capability. Due to the high slew speeds involve it is possible to suppress instrument and atmospheric "1/f" noise to a greater extent than is possible when mapping smaller fields, resulting in a 25% improvement in sensitivity.